In October 2018, I was given the opportunity to travel to Ritsona Refugee Camp in Greece by partnering with an amazing, nongovernmental organization (NGO), Lighthouse Relief.  During a one-week, tennis youth camp, I was able to provide 30 tennis rackets and 100 tennis balls to the community, and every child was given the opportunity to play tennis.  It was during this week that I was changed!  In a camp that only had soccer as an activity, the residents were provided the opportunity to play tennis and grew to love the game too.  As a matter of fact, girls (who typically would not play sports) began playing tennis and even started their own tennis games.  After that week, “love” meant more than a tennis score or my passion for the sport.

Seven weeks later, I returned to Ritsona Refugee Camp bringing two 18-foot mini tennis nets and I painted a court on a piece of waste concrete.  During this four-week visit, I was inspired at seeing the residents love for the game of tennis grow but heartbroken to not be able to properly provide the community with enough tennis equipment.  So in January 2020, I traveled back to the refugee camp with another net and more tennis balls.  In the time span between visits, not only did the community remember me, but also the resident numbers doubled!

In my final days, I approached the Lighthouse Relief with the need for a defibrillator at the camp for the 4,000 residents.  This has become my new goal!  The support thus far as been astonishing, including donations from some of the World’s greatest sporting stars that includes signed items from: Rafael Nadal (Spanish professional tennis player), Usain Bolt (former Jamaican sprinter), Rory Mcilroy (professional golfer), Franz Beckenbaur (World Cup soccer player), Bernard Dunne (World Champion boxer), and the Munster rugby team.

The support I have received has blown me away and has been very humbling for me; I never expected this level of support, I’m hoping to raise as much as i can from each item and want to use social media to get as much exposure for the NGO , raise the funds needed for the defibrillator, and expand the tennis programme to other camps in Greece and beyond. 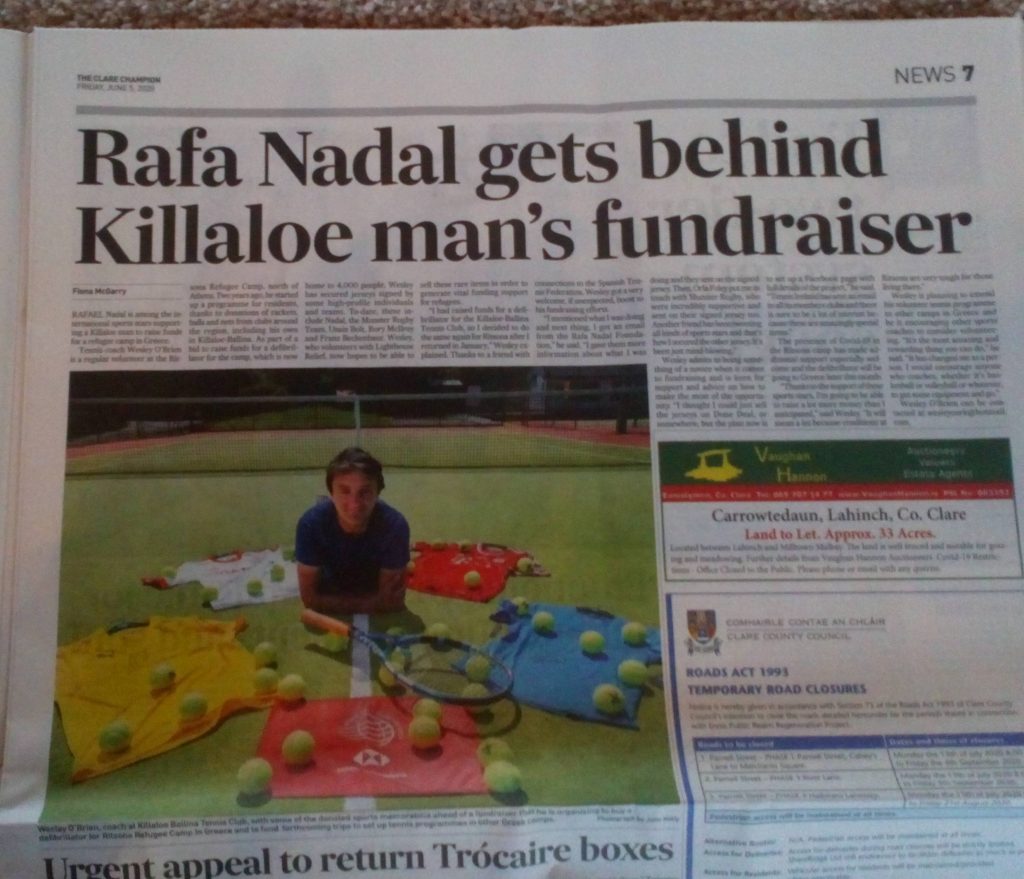