“Every dog has its day” and this certainly proved true for the Labradors, Dachshunds and Sheepdogs as they ran off with the top prizes in their respective sections. The new rule that penalised teams who used substitutes during the group-stage was often the topic of discussion amongst players. The rule proved effective as the number of subs was reduced from 76 to just 37 in this year’s League. All the teams bar one put out full-strength teams in the Finals. The one exception was the Labradors who were forced to use two substitutes and they chose wisely. David Goode of the Labradors had a Beagle beside him, sub Paul Hogan. David displayed his great talent and Mick Collins and Jonathon Cooper of the Bulldogs could find no weakness in Paul Hogan’s play. The Labradors won 2 Sets to Love on Court 1. Meanwhile on Court 2, Captain Stephan Devaney and Geraldine O’Brien of the Bulldogs were favourites to take their half of the match, having dropped only two points through the group-stage. The Labradors brought in a Rottweiler, Keith Benson, to partner Captain Avril Hayes. He played well but Avril played absolutely stunning tennis, in fairness. The match was an absolute joy to witness with rallies often going on for 10, 15 or even 20 shots as each player showed his or her box of tricks and skills. Keith defended superbly and Avril, though slight in build, provided the power, particularly on her forehand. They won 2 Sets to Love. The team that finished fourth in the League won Section A. How often have we seen that?

The Section B Final had the top two teams squaring off – the Huskies and the Dachshunds. On their previous encounter in Round 4 these two teams settled on a 23-23 draw with each team winning a tie-break at 11-All. The B Final was bound to be tight and it was. After two sets the score was 1-All on Court 3 and also on Court 4. Then, on Court 4, Vincent McHugo and June Kirwin of the Dachshunds took the third set from Captain Padraig Hyland and Kathryn Dennehy. Meanwhile on Court 3 Karen McCarthy and Captain Karen Walsh of the Dachshunds were locked in a hotly contested dogfight with Caroline Rice and Conor O’Reilly of the Huskies. Suddenly the Dachshunds found themselves with two match points or rather two Winter League points. The ball was served and the rally started. The ball came to Karen McCarthy, just beyond the service line. She stepped up to hit it. What was she going to do? What was going through her head? Perhaps, she thought, “I’m tired of being called a sausage dog! I’m tired of all the praise Huskies get from being such good work dogs pulling sledges for Eskimos while I twaddle around with these ridiculously short legs attached to a ridiculously long body!” In a moment of fierceness and ferocity she claimed herself as a true modern woman on International Women’s Day and seeing a man, a Huskie no less, by the name of Conor O’Reilly, she lashed out at the ball and sent it screaming towards Conor at the net. There was nothing he could do. The point was won. The match was over. The Dachshunds had claimed the night. They had defeated the team who had topped the League. How often have we seen that?

The Section C Final also saw the top two teams confronting each other. The top team, the Sheepdogs, comprised of Norma Power, Liam Breen (Captain), Tommy Casey and Liz Cooper registered a 3 Set to 1 Set victory over the Collies (Deirdre Flannery, Captain Patrick Seymour, Rachel Walsh and John O’Connor). Several of these players are new to the competition and I’m sure we’ll be hearing more of them in the future. The top team in Section C won the Final. We haven’t seen that very often now have we?

Many club members attended the Prize-Giving Ceremony at our sponsor Liam O’Riain’s Bar where countless anecdotes of the League and the Finals were exchanged. Thirty-two prizes purchased by Emer Keating were handed to Winners and Runners-Ups. Many thanks to Emer for doing this mammoth task! Many thanks also to the twenty-one team captains who performed their role very well. Special mention goes to the seven teams who didn’t use any subs: Beagles, Bulldogs, Terriers, Poodles, Huskies, Great Danes and Setters. So we got through the Winter! Can we possibly be looking forward to next Winter? I know I am! 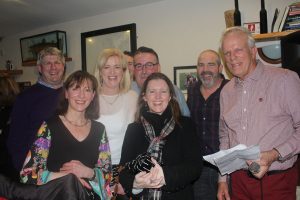 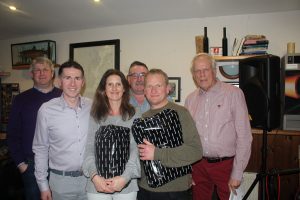 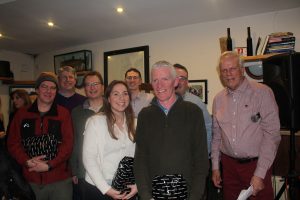 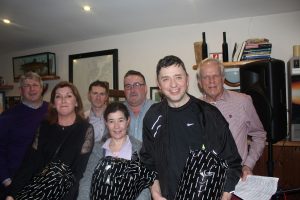 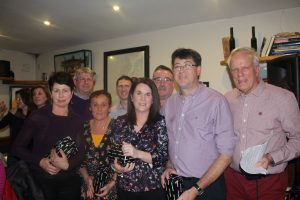 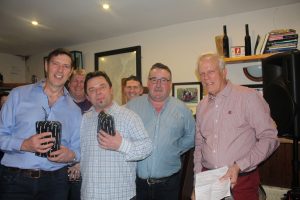 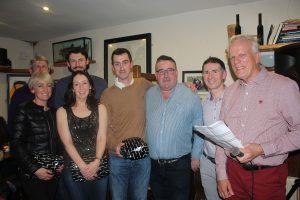 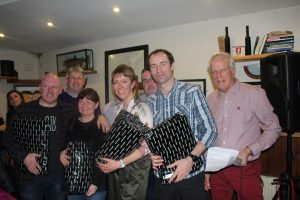 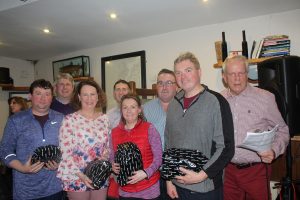