The Winter League was kindly sponsored by Liam O’Riain’s

“Well, I think it’s gonna be a long, long time!” are the lyrics of Elton John’s Rocket Man…but it wasn’t…it wasn’t a long, long time at all. Keith Benson and David Goode came back as winners in the Section A Final for the second year in a row, not as Labradors but as Rocket Men, given extra impetus by Duirmuid Garrahy and super-sub Damien Purtill. The Rocket Men had scraped into the semi-finals by creeping one point ahead of the Extraterrestrials in the group stage. They had needed six subs due to serious medical issues with two of their players. However, when they took the courts on Friday evening no one doubted the challenge that Maeve McEvoy’s Supernovas faced. The first set in both halves of the match were close but when the Rocket Men took both of them, one result was inevitable. Well done to a great team! I would like to pay tribute to Mick Collins who has been on the losing side of four consecutive Section A Finals. To get to the Finals so often is a great achievement. Maybe next year he’ll find glory!

In Section B the Aliens overcame top-of-the-table UFOs (Captain Frank Mochler) in a closely fought encounter. The teams were all-square after the first set but the Aliens proved too strong in the end. They won despite their captain, Dan Robinson, being absent. Sub Jim McGrath fitted in seamlessly with Michele Wood. Patrick Seymour and Mary Grace completed this formidable team. It was rumoured that one of the Aliens played with two artificial knees. In this age of space technology, I’m not surprised, having one of those myself. Perhaps the day will come when a robot occupies a place on a team but I’m already thinking of coming up with a new rule to counter that!

Section C was won by the impressive Comets. In the three sections they were the only team to top their section and win the Final. Nobody could bring them down to earth though the Asteroids, led by Noreen Clifton Brown, did take a set off them in the Final. I did feel sorry for the Comets as they told me everyone was supporting Anybody-But-The-Comets in the latter stages of the competition. They were led by Pat Clarke. He was ably supported by Fran Wilkinson, Deirdre Maguire and Maciej “Maxine” Kanik. They were the only Section C team with three men on it because yours truly thought Maciej was a girl’s name when I read it off the sign-up sheet. Captain Clarke gave him the Maxine nickname though I never saw him in a skirt!

The Prize-Giving Ceremony at our sponsor Liam O’Riain’s pub proved to be a great end to the League. Thirty-two prizes purchased by Emer Keating from local businesses were handed to Winners and Runners-Ups. Many thanks to Emer for doing this mammoth task! Many thanks also to the twenty-four team captains who performed their role very well. Special mention goes to the five teams who didn’t use any subs: Black Holes, Martians, Apollo 11s, Comets and Asteroids. I have recorded every score by every pair since 13 October. These will be used to determine rankings and teams for Winter League 2020-2021 which is only seven months away. And I’m determined there will be no more Maxine’s!! See you then!

P.P.S. If you won took home a Runners-Up prize, you can use the container to store four tennis balls. 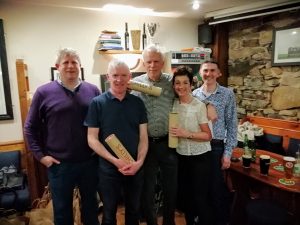 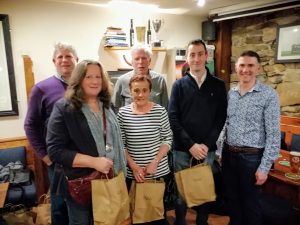 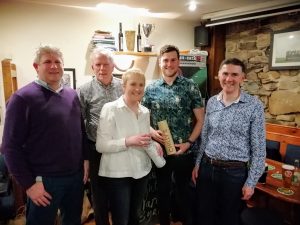 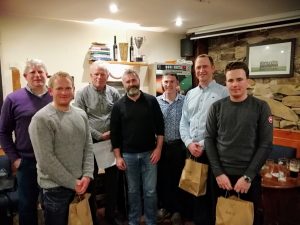 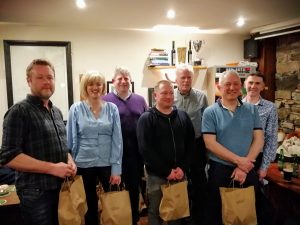 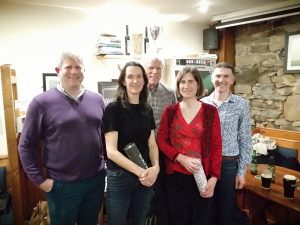 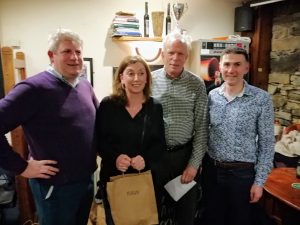 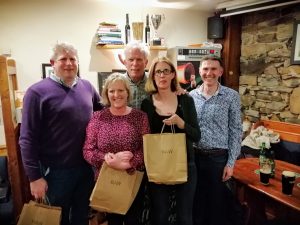