Killaloe-Ballina Tennis Club was established at a public meeting held on 22nd June 1984. While there was considerable interest in tennis among many people in the locality, the club initially comprised twenty-four members. The idea for the club originated in a shared vision among a handful of local enthusiasts who started the club with little or no resources bar the goodwill of the local community and their own collective passion for the game of tennis. 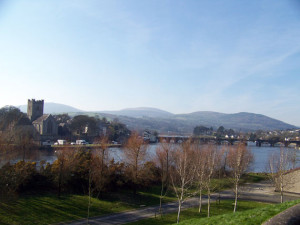 Initially, the members of the club played in the Ballyvalley Hotel tennis courts. The earliest memories of club games there date back to 1st July 1984. It is unclear how long this arrangement lasted before Mr Matt Burke secured permission to play in Rohan’s field in Ballina, where four courts once existed (these have since been demolished to make way for housing). The fond recollections of the founding chairperson Ms Noreen Blake on club activities and players at Rohan’s field indicates the enjoyment the club provided for its early members – thankfully little has changed in that regard, it seems!

With the cooperation of Clare County Council, two tennis courts were constructed in Bane Field, New Street, Killaloe and these opened in 1988. The location of these courts was to provide a permanent base for the Killaloe-Ballina Tennis Club right up to the present, and this address marked the end of the nomadic lifestyle of the club in the early years. As the club expanded and developed, a number of improvements were made to the premises. Floodlighting was installed for one court in 1995, with a similar improvement for the second court in 1998. With growing membership, a third court was added in 2001 to cater for continuously increasing demand. This in turn generated the need for other kinds of facilities, and so the existing clubhouse was completed in 2003, replacing the much loved and now legendary garden shed that had somehow catered for all our needs up to that point!

An all-weather sand-filled artificial surface was provided for all three courts in 2004. The latest piece in the development project was the construction of a fourth court which was completed by Christmas 2007.